The International NGO Forum in Guatemala -FONGI- is a coordinating and advocacy network comprised of 31 member organizations from civil societies of Germany, Belgium, Spain, the Netherlands, Ireland, Norway, Sweden, Switzerland, Canada, and the United States. It is a space for exchanging information, sharing visions, and coordinating concrete actions related to international cooperation to benefit Guatemala.

Actions implemented between January and April include the first virtual forum with the Diplomatic Corps held on April 16, centered on the topic of the criminalization of human rights defenders. We presented the cases of Bernardo Caal Xol, imprisoned for more than two years for representing Q’eqchi’ communities in defending the Cahabón River against a hydro-electric dam; and Julio Gómez, criminalized for representing communities engaging in nonviolent resistance against a hydro-electric complex in Ixquisis, Huehuetenango. Speakers at the event included jurist Jovita Tzul, with an analysis of criminalization as a lived experience among Maya peoples; and lawyers Edgar Pérez and Edgar de León, regarding prosecution patterns and criminalization methods applied to Bernardo Caal Xol and Julio Gómez. Rigoberto Juárez, Indigenous authority and representative of the Pluri-national Government of Huehuetenango, presented about the Ixquisis case and details about Julio Gómez’s criminalization. Finally, Ruth del Valle, defender of human rights defenders and journalists, spoke about the actions by the Human Rights Procurator’s Office around the criminalization of defenders. Representatives from the Embassies of Canada, Great Britain, Switzerland, Germany, the Netherlands, and Norway participated, expressing their interest in the topic, their willingness to support the issue using their spaces for interaction, and their gratitude for the exchange with international NGOs.

In the context of the elections for Constitutional Court justices, a joint action was developed between EU LAT in Brussels and FONGI through a letter mailing and contextual analysis aimed at Members of the European Parliament, members of European country parliaments, and the G-13 in Guatemala, expressing concern around the backgrounds of the elected justices who would be taking office on April 14.

During this period, the work plan for 2021 was updated, meetings were conducted with the Human Rights Commission, and the first assembly of the year with FONGI membership was held. In addition, FONGI participated in a series of meetings with the European Union to provide input into their multi-annual planning and in a space with PDH, OHCHR, and UDEFEGUA on the topic of criminalization of defenders to broaden a coordinating approach.

FONGI signed on to several statements, including on the inclusive and technical discussion for adequate services for agricultural activities, on the case of unjustly imprisoned human rights defender Bernardo Caal Xol, and a EU LAT declaration on follow-through of the European due diligence law. In February, in the wake of the violent deaths of two girls and several women, a message was posted to social media rejecting violence and murder and urging state institutions to implement actions and policies that allow girls to be safe.

The next assembly will be held in the month of May. The Jotay: ACTing Together Program will continue to hold the Pro Tempore Secretariat position from March 2021 through February 2022. 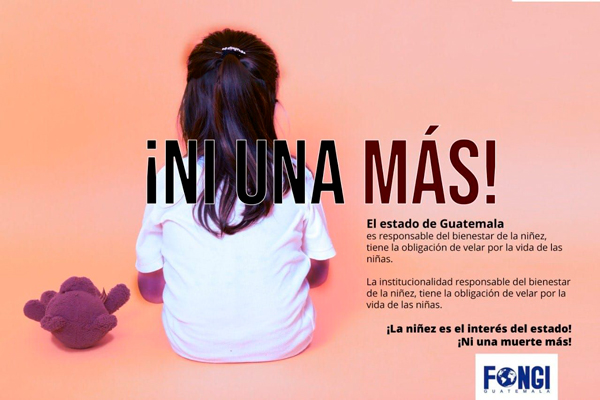